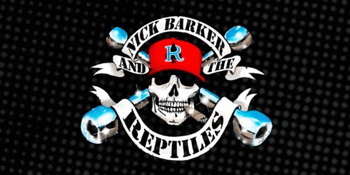 But their stock in trade was live gigs . They drank a lot of Beer, invented a card game (don’t ask) and a cocktail (vodka and staminade) and won the hearts of a lot of hardcore Australian Rock n Roll fans.

So just for the hell of it Nick Barker and the Reptiles are gonna play one and one only  Melbourne show at the Corner Hotel on  October 30th and the V and S’s are on us.