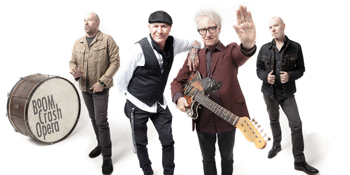 After an extended leave of absence from the band, Boom Crash Opera are celebrating the return of lead singer Dale Ryder to his rightful place at front of stage. Playing 2 sets of unadulterated hits from Boom Crash Opera's iconic tunes including tracks from their ARIA Top 10 album "These Here Are Crazy Times", feat. the hit singles 'Onion Skin', 'The Best Thing', 'Get Out Of The House', 'Talk About It', 'Dancing In the Storm' as well as the likes of 'Hands Up In The Air' and more. Likely the boys will delve deep into their treasure trove of musical gems to showcase some of the die-hard fan favourites and others from the 'Boom Crash Opera', 'Fabulous Beast' & 'Gizmo Mantra' releases. Boom Crash Opera are: Dale Ryder, Peter 'Bungie' Farnan, Peter 'Maz' Maslen & John Favaro.