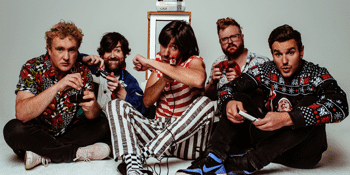 with Special Guests
Corner Hotel (Richmond, VIC)
Saturday, 20 November 2021 8:30 PM
25 days away
18 Plus
Music
POP
Australian Artists
Send this event to
Made up of three brothers and two mates, no other Australian band sounds like them. An explosion of funk, flute, sax, synth and groove, the dance floor is packed at a Vaudeville Smash gig, the crowd goes wild. In case you’re wondering, they took their name from an Italian children’s karaoke machine that was around in the late ’80s.

“I’ll be damned if Vaudeville Smash aren’t the most mind-blowingly refreshing live act to emerge from Melbourne since God knows when.” – Beat Magazine

Since their first gig at Fitzroy’s Bar Open, Melbourne’s Vaudeville Smash have carved their own niche, building a formidable following in Australia and around the world. Their national and international adventures have seen them tour Japan and the Sapporo Jazz Festival, grace stages in New York, South by South West in Austin, Singapore, Toronto, Spain, Italy, as well as numerous Australian festivals, including Woodford Folk Fest, Secret Garden, St Kilda Music Fest (Main Stage), Blues On Broadbeach & Bello Winter Music to name a few.

“You can’t help but move. The gig is an event. Vaudeville Smash are a great live band.” – Jeff Jenkins, Inpress

Vaudeville Smash's catalogue features 2 full length albums, 3 EPs and an international viral sensation with their song 'Zinedine Zidane', featuring the late, great Les Murray, which has garnered over 16 million YouTube views and has been featured in some of the biggest publications on the planet, including Billboard, ESPN, Eurosport and the BBC.