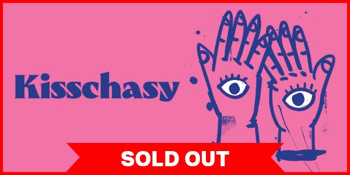 With Special Guests
Corner Hotel (Richmond, VIC)
Wednesday, 17 May 2023 8:00 pm
101 days away
18 Plus
POP
Punk
Australian Artists
Music
Send this event to
THIS SHOW IS STRICTLY 18+

THIRD SHOW on sale now! Can't make the event or missed out on tickets? Sell your tickets fast and fair through our resale partner Tixel!

KISSCHASY REUNITE FOR AUSTRALIAN TOUR MAY 2023 Alt-pop-rock national treasures, KISSCHASY recently announced they’ll reunite for a special one-off Australian headlining tour in May 2023. This will be the band’s first national tour in eight years, with lead singer Darren Cordeux making a special visit back to Australia after relocating to Los Angeles in 2015. After an overwhelming response during the band’s presale, a second Melbourne show has been added, along with a Hobart show after seeing fans from Tassie gutted they’d missed out! The national tour begins in Brisbane, before making its way to Adelaide, Perth, Canberra, Wollongong, Sydney, Newcastle, Melbourne, Torquay and Hobart. Formed in Mornington Peninsula in 2002, Kisschasy released three studio albums, two of which are gold certified, two gold certified singles alongside scooping up multiple ARIA Award nominations. They became festival darlings with performances at some of Australia’s biggest festivals including, Big Day Out, Splendour In The Grass, Groovin’ The Moo & Homebake, alongside countless sold-out headlining tours playing at some of Australia’s most landmark venues. Don’t miss seeing Kisschasy live, performing all their hit songs including ‘Do-Do’s & Whoa-Oh’s’, ‘Opinions Won’t Keep You Warm at Night’ and ‘Spray on Pants’.


Corner strives to create a safe space that everyone can enjoy.
Crowd surfing & dangerous behaviour will result in removal from the venue.
Click here for our full conditions of entry.