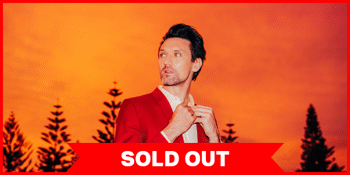 Can't make the event or missed out on tickets? Sell your tickets fast and fair through our resale partner Tixel!

Paul Dempsey is the singer, guitarist and principal songwriter of one of Australia’s most successful and respected bands, Something for Kate. Equally known as one of Australia's most original and successful solo artists, he has now released seven platinum and gold albums to date with Something for Kate and two solo albums.
Amassing a staggering 13 ARIA nominations, multiple Rolling Stone gongs for best band, best album & best male vocalist along with countless sold out tours with everyone from David Bowie to Death Cab for Cutie, Dempsey is regarded as one of the country's finest and most fiercely original lyricists with a talent for creating stunning pocket universes populated with vivid characters and evocative stories. His solo shows reveal Dempsey as a vocal force to be reckoned with, playing tracks from his & Something for Kate's entire back catalogue along with his enviable array of legendary, well curated covers.