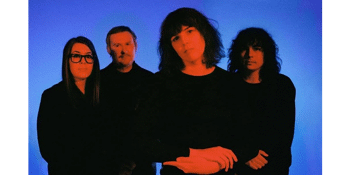 Today RVG announce their long awaited Feral Australian Album Tour. Now over a year since it's release, and with plenty of time for the band and fans alike to ruminate on it's themes in isolation RVG are bringing the album to life across Sydney, Brisbane, Melbourne, Adelaide, Perth, Fremantle and Castlemaine.

Starting the tour with a bang RVG are playing at the Sydney Opera House as part of Vivid Live before heading around the country throughout August and September.

To Romy Vager, RVG’s lead singer and lyricist, to feel feral is to feel outside of everything. Throughout the album that feeling of isolation is incited, but it never feels hopeless: these songs channel the raw energy of despair and frustration into melodies that often feel victorious, perhaps only because they so aptly supply a soundtrack to the end of days.

Following a recent collaboration with Julia Jacklin covering Björk's 'Army of Me' and a handful of Melbourne based shows earlier this year, including a slot at Boogie Festival, RVG are set for their return to shows across the border. Tickets are on sale now.